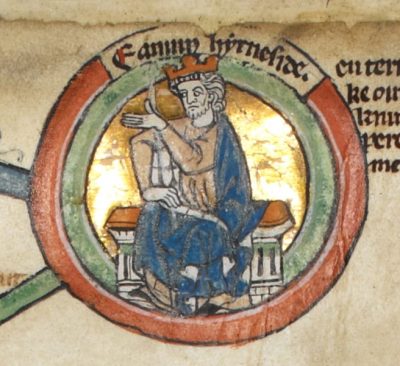 Edmund Ironside remains the only extant play of several that were thought to have been written about the Viking invasions which transpired around the turn of the first millennium. It exists in a single manuscript, or handwritten, form, and is held at the British Museum.

The play is rollicking and fast-moving, with a good deal of red meat for its audience, ranging from extreme onstage violence (a scene of dismembering on par with that found in Shakespeare’s Titus Andronicus), martial battles, and broad comic relief. 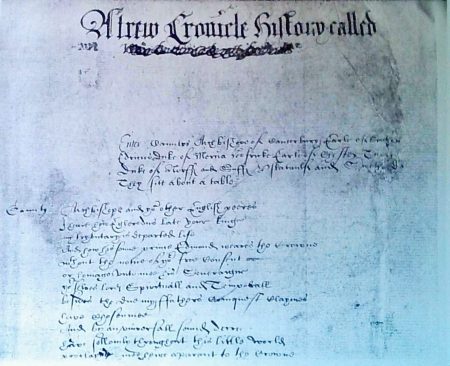 In 1986, scholar Eric Sams published a book in which he argued forcefully, and with voluminous evidence, that William Shakespeare was the author of Edmund Ironside. The numerous similarities in style, language, and usage of Holinshed’s Chronicles and the Bible between this play and the Bard’s early own plays lend a great deal of persuasiveness to Sams’ argument.

The manuscript itself possesses several interesting features. Firstly, this version of the play, which appears to be complete, was edited by a secondary hand to prepare it for use in an actual stage production. There are numerous deletions (though thankfully the removed material can be easily read), as well as some alterations and additions. More arresting is that the names of several prominent actors’ have been attached to those of some of the plays’ characters; this provides powerful evidence that this particular manuscript was likely used for a stage production in the 1630’s, the time when these actors were known to be active.

Our Story: King Ethelred the Unready has died, leaving to his son Edmund a war-torn nation that is still suffering under the yoke of fierce and cruel Danish Vikings who occupy the island. Can Edmund rally the dispirited English sufficiently to effectively resist the armies of Danish King Canute?