To become as engaged in an ancient play as the original audience would have been, it is important to understand as many conventions of Elizabethan drama as you can.

What is meant by conventions? “Conventions” can be broadly thought of as the tacit expectations of the audience. For example, character types are expected to behave a certain way; many beliefs, references and jokes are understood without having to be explicitly explained. 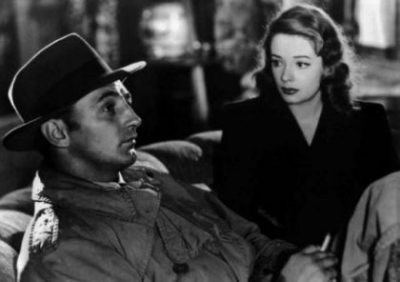 Conventions exist in any frequently repeated formula used in the world of entertainment. If you are sitting down to watch a movie of the film noir genre from the 1940’s, think about all the distinct characteristics you expect to see: shadowy black-and-white camera work, clipped, ironic dialogue, and dark, sinister characters.

Please note, the conventions discussed here focus on concepts that are of greatest relevance to those who are experiencing the plays by reading them. Issues external to this experience − such as how the theatre seating was organized; how plays were advertised; the colors of the costumes as a guide to their wearers’ social status – are not treated here.

Let us begin this survey by noting that Elizabethan plays were performed by all-male troupes. Earlier plays of the era were especially likely to be performed by a group of young boys, while professional adult all-male companies arose later. Boys and men played all the roles, including of course the females. For this reason, no matter how raunchy the material, extended physical contact between characters rarely went beyond a kiss.

A healthy proportion of Elizabethan plots revolve around the upper classes. At the top of the food chain are the king and queen, or duke and duchess. Attending these folks at court were those nobles known as courtiers. Courtiers could be wise advisors, evil villains, honorable friends, revenge seekers, practical jokers and sexual predators.

The plays very often take place in foreign countries, especially Italy, though Spain and ancient Greece can also serve as settings. This, it has been suggested, was done to avoid having theater-goers try to guess which members of the English court were being parodied or commented on; a foreign setting also protected the playwright from seeming to be directing commentary at the English court and nobility; this was, after all, the era of the divine right of kings, and British royalty was not be criticized.

If we assume that authors always give the audiences what they want, we can conclude that Elizabethan audiences were obsessed with sexual behavior, and particularly with the presumed licentiousness of women. Indeed, this was a man’s world: although women did attend the theater, the authors were all male, and the actors themselves were all men. 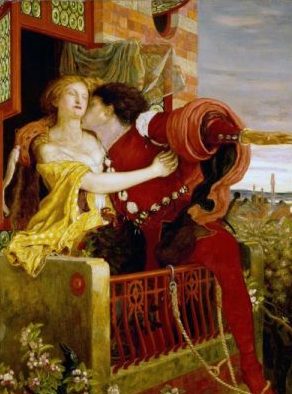 There was, to be blunt, a very low bar of expectation regarding the character of women. Women were simply expected to be easily seduced, due to natural weakness in their character. Even a man happily married to a woman of known virtuousness could easily be led to suspect his wife of willingness to cheat on him, if she were given half a chance. Thus, outrageously jealous husbands and lovers appear quite commonly. On the other hand, a virtuous woman might also be savagely criticized by a frustrated wooer. And if a woman were chaste, she would be expected to be shrewish. The women just could not win.

And yet, there are numerous examples of saint-like women, who are frequently the most admirable characters in a play.

Men, too, could be honorable or sluttish, and the plays feature an endless parade of sex-obsessed courtiers and lustful young men, willing to promise anything to get a woman.

Tragedies, especially if they contained themes of revenge, were very popular. As the era progressed, however, the authors came to almost always include at least one comic character, and a couple of funny scenes or encounters, to mix it up for the audience. So, as you read what is ostensibly a tragedy, be prepared to find humorous moments and dialogue harshly juxtaposed between scenes of the highest seriousness.

In fact, the term tragicomedy was used (it appeared first in 1586, according to the OED) to describe those plays that contained varying proportions of both tragic and comic elements.

What were the sources of comedy? Those familiar with Shakespeare may be aware at how dependent he was on punning. Well, this is common to all of the authors of the era. Indeed, this joyful playing with the English language, even if the individual puns themselves may not be particularly funny to a modern, sophisticated reader, is, I think, a quite pleasing feature of the era.

There is no shortage of comically self-important characters; dull-witted fools; drunkards; and beggared citizens and abused servants. These were all sources of humor. 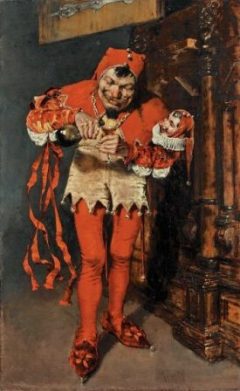 And of course, many plays feature characters known as “clowns” or “fools”: these were, broadly speaking, characters licensed or known to be deliberately humorous. They could be officially appointed court jesters, or simply servants with parts written to be “wisely-foolish.” Such characters could be used to comment on the wisdom, or lack there-of, of the other characters.

A soliloquy occurs when a character speaks alone on the stage; an aside, when not spoken directly to another character, occurs when a character speaks his or her thoughts out loud, but is unheard by any of the other characters. Soliloquies and asides are used to inform the audience of the character’s actual thoughts, which may deliberately be kept hidden from those around him or her. They may also be used to comment on the action, again for the audience’s benefit.

The dramatists used many figures of speech, indeed too numerous to describe here: one particularly common one, worth keeping an eye out for, is apostrophe, in which a character directly addresses a person who is not present, a thing, or an abstract idea, such as Reason or Honor – such abstract ideals being often personified.

The Elizabethan stage had a platform which was located higher than stage level at the back of the stage – the “balcony”, if you will. Actors could appear and speak from the balcony. In the context of the play, the balcony could serve as an upper floor from which characters could see, often secretly, what was happening on a lower floor; an upper window, from which a character could see “outside”, which would be represented by the actors at stage-level; and quite frequently, battlements or city-walls, from which citizens or soldiers could look out upon an army, perhaps one engaged in a siege.

Characters often would wear disguises to affect some plan or another. Although the audience could easily see through them, disguises were absolutely impenetrable to other characters, unless it suited the author to have it be otherwise to further the plot. This convention went so far as to allow a disguised husband to make love to his spouse without her knowing who he was.

Similarly, if a character wants to spy on another, it is assumed that he or she can do so easily, without being discovered, by simply stepping behind a piece of furniture, for example. Additionally, persons being spied on will often helpfully express their thoughts aloud to themselves, to the great benefit of those watching them.

Speaking of disguises, characters often hide themselves in the disguises of the opposite sex. There is obvious irony here, as quite frequently our young boy actors will find themselves playing female characters, who, for various reasons, are compelled to disguise themselves as boys.

Oaths and vows were sacred. Any oath or vow made directly to Heaven or God was seen as inviolable. A character’s willingness to break a vow, or to tempt another to break a vow, was a good measure of the moral code of the character.

A particularly important vow was the contract for marriage. When a man and woman swore to marry each other, especially in front of witnesses, their vows were considered unseverable, with serious repercussions returning on those who flippantly broke them. Indeed, such promises were legally enforceable. 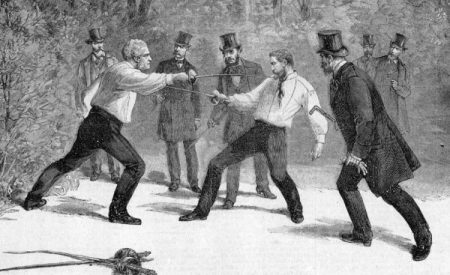 Respectable adults kept a continuous and close watch on their reputations. Men would not stand for any insult, explicit or implied; to be accused of cowardice was especially shameful. Duels might result from an exchange of words.

If you pay close attention, you will notice a technique playwrights frequently used to dramatically build tension, a tactic we might call compression of time. “Compression of time” exists when an impossible number of things occur in a brief amount of “time”. For example, historical events that occurred over many years may be described as having occurred within a few days of each other, or simultaneously (historical plays, especially Shakespeare’s, are filled with such occurrences).

Here is an example of compression of time on a smaller scale, from Philip Massinger’s The Duke of Milan: in the time it takes Francisco to ride out to his sister’s home in the country, the Duke of Milan has sent out pictures and warnings throughout the land, putting the entire dukedom in high alert to look out for Francisco. Or, in William Rowley’s All Lust is Lost, the king orders a noble to go out and raise an army. A few minutes of real time later, the noble returns, informing the king he has 20,000 soldiers ready to go! This is a great technique authors use to speed up the action, building the tension and suspense dramatically.

I find it particularly interesting to consider that, when the physical traits of a character are commented on, we may assume that the role was likely written for a particular actor who had those traits. Thus, in Massinger’s The Duke of Milan, when Marcelia and Mariana hurl insults at each other, which target the former’s tallness and the latter’s shortness, it is fun to think about how the actors chosen for those roles probably were unusually tall and short respectively. The playwright William Rowley, for another example, usually incorporated the role of a fat clown into his plays, to be acted by himself!

An employed soldier was a happy soldier. Men who made a living at arms were useful members of society only when there was a war on. Once a war ended, and the soldier dismissed from service, he could be expected to become a parasite, usually a beggar, or, if he was lucky, the dependent of a pitying man of wealth.

Men and women of wealth, power or influence would be expected to have “followers”. These were usually men who lived to some degree dependant on their patron, but who served them voluntarily (that is, they were not hired servants) in any function the patron desired: they could perform errands, do favors, just hang around them to help them show off their status, or, if the patron were evil, do their dirty work for them.

We cannot end this section without mentioning the two most pervasive jokes running through the entire corpus of the era: (1) the allusions to venereal disease, and (2) the references to the imagined horns of cuckolded husbands.

(1) With sexual morality seemingly nonexistent and medicine in its infancy, venereal disease was rampant in London society. The plays are thus filled with jokes about the symptoms of sexually transmitted disease (aching of the bones, sciatica) and popular, if ineffective, treatments (sweating in a hot tub). 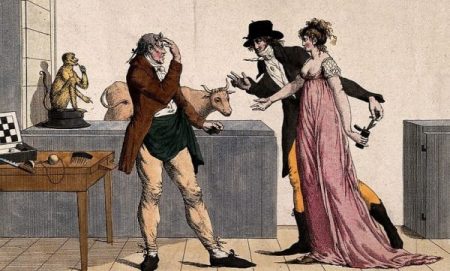 Finally, keep a watch out for self-referential dialogue: that is to say, characters frequently compare their situations to the stage (as in “All the world’s a stage”), or to themselves as actors playing roles; the irony is obvious, but never fails to be endearing.

A small book can be written (and probably has been) discussing all of the conventions of Elizabethan plays. As you become familiar with the style and content of these works, you will unconsciously pick up increasing numbers of conventions that go well beyond what I have attempted to convey here. This will only further your enjoyment of the greatest literature ever produced in the English language.