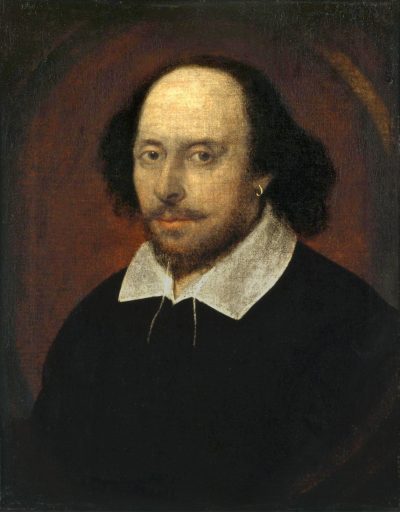 IT TOOK A YEAR of painstaking research, grinding through thousands of words listed in the Oxford English Dictionary as having been invented, or at least first employed on the written page, by William Shakespeare. But we have completed the project.

SO HOW MANY WORDS DID SHAKESPEARE INVENT?

William Shakespeare invented 594 words. This number does not include compound words.

The reason we do not count compound words in the list is that it is almost impossible to come up with a good definition of what should count as a compound word and what should not. For example, in Henry VI, Part I, Shakespeare wrote, “To me, blood–thirsty lord” (Act II, Scene iii). Based on this line, the Bard is given credit with inventing what is now a common compound word, bloodthirsty.

But take a look at these lines from various plays:

Now take a look at these examples:

Here’s a Bohemian–Tartar tarries the coming down of thy fat woman (The Merry Wives of Windsor, IV.v.18).
Would any but these boiled-brains of nineteen and two-and-twenty hunt this weather? (The Winter’s Tale, III.iii.62).
It is like a barber’s chair that fits all buttocks…the brawn-buttock, or any buttock. (All’s Well That Ends Well, II.ii.17).

Should the bold-faced terms above be considered real compound words? They are listed in the indispensable dictionary, Shakespeare’s Words, by David and Ben Crystal as compound words; but the sentences also make perfect sense if these terms are accounted to be distinct words.

In sum, then, I have made the simple decision to not include what may or may not be compound words in the list of Shakespeare’s invented words. However, I have created a list of popular and still-commonly-used compound words which Shakespeare invented.

Contrary to public belief, Shakespeare did not really “invent” words, in the sense that he, for example, decided he needed a word that means “cow”, but with four syllables, and so out of his imagination came up with the word “grabofillbert”. Rather, he adapted old words by fitting them with prefixes and suffixes, or by combining them, to give them a new sense.

We do use the word “invented” on this site, for two reasons: (1) it is a handy short-hand way to get the attention of internet researchers, and (2) to be gently ironic.

Why did Shakespeare invent words? Because (1) he needed a word; (2) he would have been in a hurry to complete any play he was working on, due to the publics great demand for new material, and (3) he did not have a dictionary or thesaurus to help. Indeed, the first dictionaries had not yet been written in the early 17th century.

NO ACCURATE INFORMATION AVAILABLE ANYWHERE (ESPECIALLY ON THE INTERNET)

In this section of our website, we will be presenting what we hope will be the most accurate list of words “invented” by William Shakespeare available anywhere – and also lists of words wrongly attributed to him!

The internet is filled with misinformation regarding words first created by the Bard.

The most persistent of the “facts” is that Shakespeare invented 1700 words; the number 1700 has taken off like a virus, and is casually tossed around by many individuals writing on the subject, despite the fact that there seems to be no particular authority for this number.

Several websites list some number of words attributed to Shakespeare; they all include words that even a bit of research would show do not belong there (they having been used previously to Shakespeare, and with the same meaning as Shakespeare used). They also mislead the inattentive reader, by failing to distinguish between

(1) words actually coined by Shakespeare, and
(2) words he adopted by using them
(a) in a new part of speech (e.g. using a traditional noun as a verb), or
(b) to mean something different.

Some sites even commingle Shakespeare’s original words with words they claim he “popularized”, whatever that means!

Undoubtedly the reason for these errors is that the venerable Oxford English Dictionary is believed to be, frankly, infallible. If you look up the word anchovy, bedroom, or hint, for example, the earliest citation listed is from the works of Shakespeare. However, a bit of research proves that the words all appeared in print well before Shakespeare ever even began writing plays and poems (considered to be around 1589-1590).

This is no fault of the OED’s; most of the OED’s entries have not been revisited in more than a century. The editors of the OED are in the early stages of a project to revise and update the dictionary, but this monumental task will take years, if not decades, to complete.

THE CREATION OF THE OED

Indeed, the creation of the OED (a fantastic story, told brilliantly by Simon Winchester in his 1999 book, The Professor and the Madman) ensured it would be far from perfect: its words and citations were provided over a period of decades by a world-wide army of volunteers, reading random old books and writing down words and quotes whenever a particular word or phrase caught their fancy. Such a subjective and helter-skelter approach was bound to be error-filled.

Frustrated by a lack of precise and correct information, your editor has begun a lengthy project to research and determine as accurate a list of words first used by Shakespeare available anywhere ever.