Cosmology in Elizabethan Drama, a Primer.

“Yet you, the murderer, look as bright, as clear,
As yonder Venus in her glimmering sphere.” (Midsummer Night’s Dream, Act III, Scene ii)

“Now clear the triple region of the air,
And let the majesty of Heaven behold
Their scourge and terror tread on emperors.” (Tamburlaine, Part One, Act IV, Scene ii)

Faust. “How many heavens or spheres are there?”
Meph. “Nine: the seven planets, the firmament, and the empyreal heaven.” (Doctor Faustus, Scene VI)

The plays of Shakespeare and Marlowe, and their contemporaries and successors, are filled with references to a view of the universe that would be considered completely foreign to a modern astronomer, never mind the lay reader of Elizabethan drama. It is our intent to present in this single document a comprehensive, yet easy-to-understand, explanation of how exactly English Renaissance writers understood the universe to be organized, or at least how they enjoyed describing it to their readers and listeners.

We may note that the Polish-German scientist Nicolaus Copernicus (1473 – 1543) had presented his research, proposing that the sun was the center of our solar system, in the early 16th century. However, our late 16th century English writers stuck to what is called the geocentric vision of the universe, which insists that the earth sits at the center of everything. This belief system is often referred to as the Ptolemaic model, named after one of its earliest expounders, the 2nd century A.D. Greek astronomer Ptolemy, who lived in Alexandria, Egypt.

It was believed the universe is composed of four elements: air, earth, fire and water. All matter is composed of these elements. Hence, Doctor Faustus can yearningly wish that his soul, which was damned to go to hell, had been like those of animals, “For, when they die, / Their souls are soon dissolved in elements.”

Earth and water are the heaviest elements; hence, they rest at the center of the universe, forming a globe, which we call “the earth” or “the world.” The world is perfectly round. Water can be found on the earth. Completely surrounding the earth is a region, or layer, of air, also spherical in shape. Immediately surrounding the sphere of air is a sphere of fire, which is the lightest element.

Fire is considered the clearest of the elements. Air is less clear than fire. After air, water and earth complete the list, in order of decreasing clarity.

Each element is assigned identifying characteristics regarding temperature and moisture content:

C. The Triple Regions of Air.

The layer, or sphere, of air, is actually composed of three regions.

a. The lowest region of air is immediately adjacent to the earth. Its temperature is moderate, or temperate. Within this region exist all living, material things, plants, birds, beasts and humanity. Also found in this lowest region of the air are such meteorological phenomena as “dew, frost, hoarfrost, mists, etc.”2

The health of the human body is considered to be controlled by four key liquids, called humours. These are yellow bile, blood, phlegm and black bile. Good health requires that the humours be present in their proper proportions. If any of the humours comes to dominate by becoming more prevalent than the others, illness sets in.

Each humour is associated with a particular character or temperament; possessing an excess of black bile, for example, causes one to be melancholic; phlegm, phlegmatic; blood, sanguine; and yellow bile, choleric.

The oddest concept of the Ptolemaic view of the universe is that of the sphere. Imagine the moon placed in or attached to an enormous, invisible, crystal sphere that surrounds the earth. Now this sphere revolves around the earth once a day. From the vantage point of a person looking up into the sky, the moon appears to be revolving around the earth.

If one thinks about this, the theory of spheres makes perfect sense, and absolutely explains how it is that all the celestial bodies indeed appear to revolve around the earth.

In the Elizabethan cosmological view, there are seven planets. The moon and sun are considered planets. Each planet is fixed in its own distinct sphere, and the spheres are numbered based on their increasing distance from the earth, as follows: 1. the moon, 2. Mercury, 3. Venus, 4. the sun, 5. Mars, 6. Jupiter, and 7. Saturn. The spheres are concentric, with the earth in the center. Thus, the sphere of Mercury surrounds the sphere of the moon, and so on.

The planets’ spheres surround the spheres of the elements; the moon’s sphere, specifically, is immediately outside that of fire.

Though the spheres turn all together, each planet stays attached to its own sphere; the planets are also not stuck in a fixed, single point on their respective spheres; each planet has the ability to roam about, following its own course, as long as it remains in its own sphere. Hence, the planets are referred to by Christopher Marlowe as “erring stars,” or “wandering stars.”

The 8th sphere contains all the stars of the universe. Because the stars appear in the same place in the skies each night, they are referred to as “fixed stars.”

Things get a little confusing once we move beyond the 8th sphere, as there was no fixed idea of exactly what spheres lie beyond the stars; as one of the sources for Elizabethan writers put it, “the variety of opinions concerning the heavens, do manifest the incertainty of human skill.”2

a. The Primum Mobile.

The Primum Mobile, holds and rotates all the spheres within it every 24 hours.

b. The Empyreal Heaven.

Also known as the Coelum Emperium, the highest Heaven, and the burning Heaven, the Empyreal Heaven (a favourite of Christopher Marlowe’s) exists at the absolute limit of the universe. It is in the Empyreal Heaven that we find God the father, Jesus, and all the angels.

Contemporary writers also mention a sphere called the Secundum Mobile, in which are found the “twelve signs”; another sphere is the Coelum Aqueum (also called Coelum Christallinum and Coelum Adamantium), a watery, icy, crystal or hard Heaven. Either of these spheres would be found between the Primum Mobile and the sphere of the stars.

An interesting characteristic of the spheres was that they were said to produce a soothing music, or harmony.

There are countless references in the plays to the belief that the position of the stars and / or planets (and especially their arrangement, or aspect, at the moment of a person’s birth) played a role in determining an individual’s fate, fortune and personality. 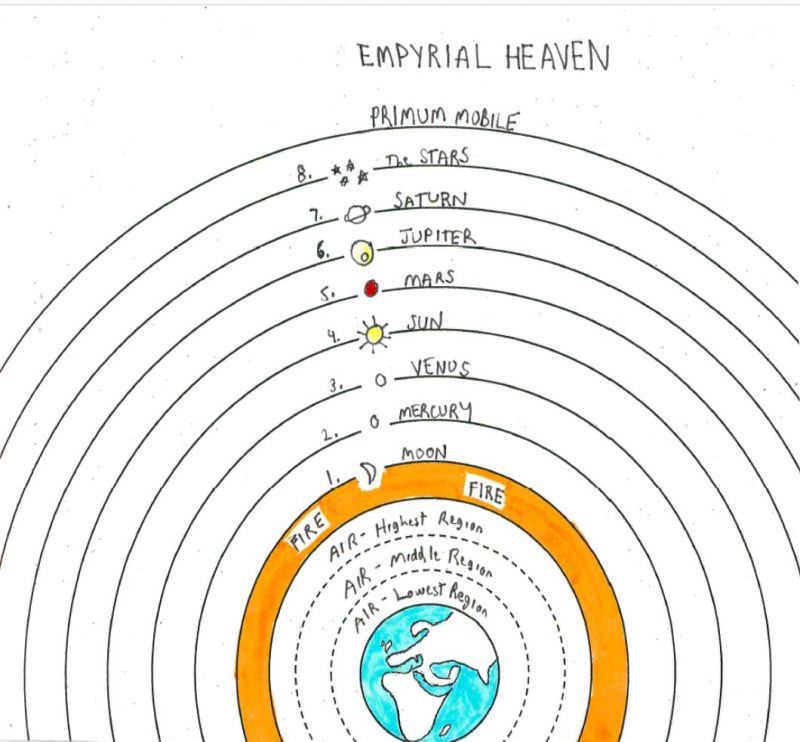