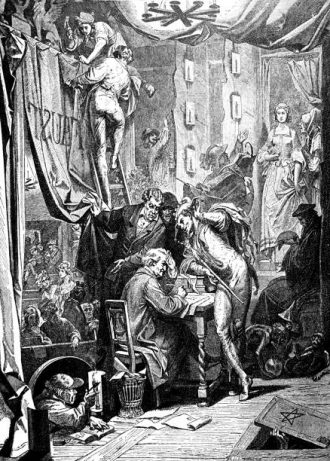 One of the goals of this website is to encourage theatre production of the great plays of the English Renaissance, which means those dramas written and produced in the later Elizabethan era (through her death in 1603), as well as those that appeared during the reigns of both James I (reigned 1603-1625) and Charles I (reigned 1625-1649), all the way to the closing of the theaters in 1642. And so, here, for the first time on the internet – and maybe anywhere – I have begun a project to create a go-to repository of scripts of plays outside of the Shakespeare canon.

Our plays contain line numbers, and each new scene starts on a new page.

Regular performers and readers of Elizabethan drama know that the original editions of these plays generally contain numerous typographical errors, many of which are so gross that it has been difficult for later scholars to figure what the playwrights actually originally wrote. So, each play contains a list of the emendations that have been proposed by editors to many of those lines over the last four centuries. These emendations fall in a number of categories, e.g. modernization of words, improving sense and meaning of lines, or modest changes which repair the lines’ pentameter.

My favourite part of this website is that directors and performers can, in conjunction with learning the lines, read the fully annotated versions of each play from this site, so that each participant may achieve a deeper level of understanding of the play and characters than any theatre group has ever likely had since the plays were originally performed four centuries ago!

We have begun the process of creating Script Editions of all our plays, even as we add new plays to the database. Plays in blue have Scripts available immediately.

The Complete Plays of Robert Greene

The Complete Plays of Christopher Marlowe

The Complete Plays of George Peele