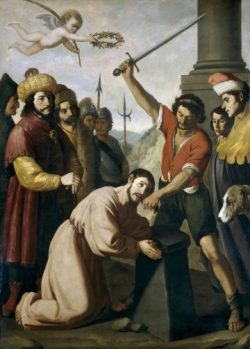 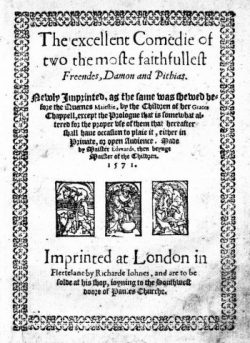 Damon and Pithias is the first modern play to combine tragedy and comedy in a single stage production. It is also the earliest play to use a tale from ancient mythology for its plot. As with all subsequent Elizabethan plays of this sort, the low-bred characters, despite their ostensibly exotic identities, are thoroughly English in character and language, a lot of it rather rude. Damon remains an interesting link to the more advanced dramas of Lyly, Peele, Greene and Shakespeare which were to follow it within only a couple of decades.

Our Story: Damon and Pithias, two best friends, are tourists visiting the city of Syracuse. A local weasel tricks Damon into admitting (sort of) that he is a spy, and his words are reported to King Dionysius, who orders him to be executed. The king, however, allows Damon to go home first to settle his affairs, and Pithias volunteers to stay behind to take Damon’s place at the execution block should Damon fail to return within two months.

1. Watch the 1914 silent movie version of Damon and Pythias. This very early full length movie (about 54 minutes running time) from Universal Studios featured spectacular sets, and a cast of 100’s!

Still-Familiar Words and Phrases that Appeared in English Literature for the First Time
in Damon and Pithias:

buss (meaning to kiss)
filling (as an adjective)
pawn (as a verb)
plod (meaning to walk slowly)
sea-sick
to “go with one quietly”
“ran…as fast as I could”.
“at one blow”
“but soft”
to “lift up one’s sword against”
share and share (a)like
to “be one’s debtor”
to be “sorry for one”
to “stretch a point”
collocation of limbs and weak, as in “my limbs grow weak”
collocation of sing and in tune, as in “she sang in tune”