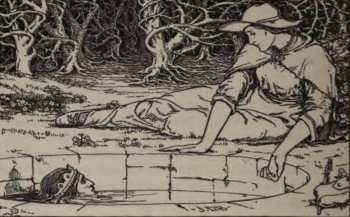 The Old Wives’ Tale by George Peele is notable primarily for its play-within-a-play format: a peasant woman weaves a fairy tale for some young lads in her home, but the interesting part is that the narrator and her audience remain on stage for the duration of the play, and comment on the story, which is acted out in front of them. The primary plot is light, a fanciful tale complete with a sorcerer, a kidnapped princess, and some really creepy heads that rise up from a spring. An oddity of the play is that all the characters of the fairy tale are from Greece, but have somehow ended up in England for some reason!

Our Story: Three servants are lost in the woods, but saved by a blacksmith, who invites the lads to spend the night in his cottage. His wife tells two of the boys a fairy tale, in which a princess is held prisoner by a sorcerer. Multiple knights and princes search for damsel in distress, and are helped by another victim of the wizard, one who turns into a bear at night and old man during the day.

Still-Familiar Words and Phrases that Appeared in English Literature for the First Time
in The Old Wives’ Tale (according to the OED):