(John Fletcher will be treated separately in his own page) 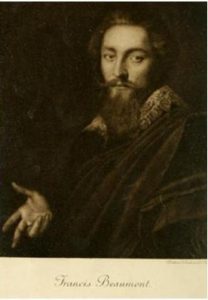 Francis Beaumont, who may have been the funniest dramatist of the Elizabethan era, died at the tragically early age of 32. If for nothing else, he should be remembered for his solo creation of The Knight of the Burning Pestle, the satire of Don Quixote that remains the funniest play in the entire Elizabethan canon. In the mean time, his name is forever linked with his great collaborator, John Fletcher, and the two shall likely live through all time as inextricably connected as Laurel and Hardy, and Lennon and McCartney.

Born in 1584 in Grace-Dieu, Leicestershire, the seat of the well-off Beaumont family, Francis was the third son of a judge. In his second year at Oxford, Beaumont’s father died, and the young man left school and moved to London, where he was entered as a member of the Inner Temple. It is unlikely, however, that he ever pursued his legal studies.

Sometime during those shadowy days, he met and became great pals with young John Fletcher. They went on to share a home and a servant-maid between them, living in Southwark near the theaters. As the Encyclopedia Britannica wrote about the pair in 1911, “the household …was conducted on such thoroughly communistic principles as might have satisfied the most trenchant theorist who ever proclaimed as the cardinal point of his doctrine, a complete and absolute community of bed and board, with all goods thereto appertaining.”

The two young writers entered the drama business perhaps around 1607 or earlier, with their first definite shared play Philaster appearing in 1608. Sadly, the pair only had 8 more years to work together before Beaumont’s untimely death, during which time they collaborated on perhaps nine to a dozen total plays.

Francis Beaumont married, it may be noted, in about 1613, to one Ursula, a union which produced two daughters, Elizabeth and Francis, the latter being born posthumously.

Beaumont’s writing genius has been recognized and celebrated for four centuries; the Encyclopedia Britannica writes of his “radiant genius”, and waxes eloquently about his writing style, which was “deeper, sweeter and nobler” than the more exuberant style of his great friend John Fletcher.

Beaumont’s body lies under a stone in Westminster Abbey, near those of Geoffrey Chaucer and John Dryden.