“The Face That Launched a Thousand Ships:”
A Brief History of a Famous Phrase. 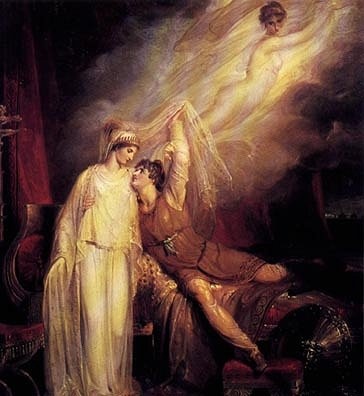 One of the most misleading scenes to appear in a recent film about Shakespeare (ok, so there are not that many of them – of films, that is) occurs in Shakespeare in Love, in which we see an inspired Joseph Fiennes (as the Bard) sitting at his table with ink and paper flying about as he whips out page after page of Romeo and Juliet, guided by a Muse that allows him to create the greatest play ever written in what can only be described as an inspired frenzy.

The reality is much different. The Elizabethan dramatists probably had to work a lot harder on their plays than this otherwise entertaining movie lets on. Multiple drafts and rewrites were likely the norm. Now I of course can’t know any of this for a fact, but there is one great clue as to the nature of play-writing in the16th century: most of the plays of the era are filled with phrases, lines, passages and images that were clearly lifted from the works of other authors.

Christopher Marlowe’s plays, for example, are filled with passages that are clearly borrowed and adapted from Arthur Golding’s 1567 English translation of Ovid’s Metamorphoses. And William Shakespeare’s plays are in turn filled with collocations, word clusters and allusions from Marlowe’s plays.

In other words, Elizabethan playwrights may have spent a lot of time consulting the works of others for linguistic inspiration, even as they were in the midst of writing their greatest works. It is even easy to imagine our dramatists, who we must assume were well-read and very familiar with each other’s works, keeping notebooks of phrases and allusions which they found appealing, set down for possible future use.

We turn our attention now to the most famous line from Elizabethan drama that does not come from the works of William Shakespeare:

Was this the face that launched a thousand ships? 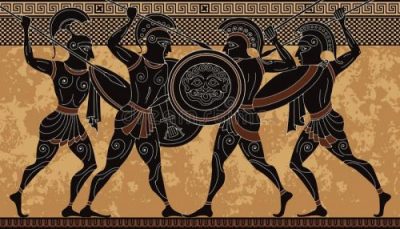 The line was written by Christopher Marlowe about Helen of Troy. It appears in his famous play, Doctor Faustus, which was written about 1589, but whose earliest extant edition is from 1604.

The typical modern reader of Elizabethan drama might assume that this line just magically flowed one morning out of the brain of Marlowe, through his arm, fingers and pen, and onto the page, having been created out of a void in a moment of inspiration. But the reality is quite otherwise. There are a number of clues in the record that actually give us a pretty good idea where this line really came from, how it was actually created in stages or steps, and was further a happy consequence of Christopher Marlowe’s penchant for regularly reusing words and phrases from one play to the next.

PART I: SLOW BIRTH of an IMMORTAL LINE.

Editors have long noted that 16th century writers regularly used round numbers to indicate a large number of items, and which were not to be taken literally. In Shakespeare, we find lines like these (all spelling will be modernized):

The literary collocation a thousand ships was ubiquitous throughout the 16th century:

(The first quote is from a 1579 translation of Plutarch’s Lives, the second from a 1578 work, An Ancient History and Exquisite Chronicle of the Romans’ Wars.)

2. A Thousand Ships to Troy.

Furthermore, it was a literary commonplace to suggest that the Greeks sent a thousand ships to Troy: 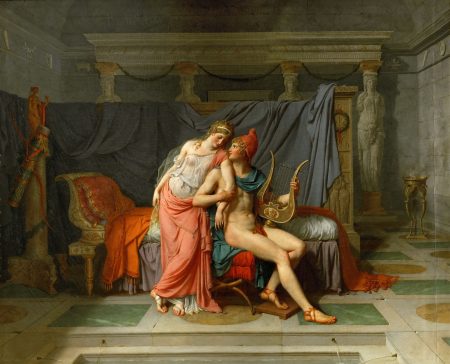 (1) Wherefore they assembling to the number of a thousand ships, swore never to return, until they had brought Troy to confusion …
(2) How ye Greeks, strong in arms, with a thousand ships went to Troy-ward…

(The first quote is from Thomas Cooper’s 1578 Thesaurus Linguae, the second from a 1483 edition of Geoffrey Chaucer’s Troilus and Criseyde.)

So, when in writing his first play, Dido, Queen of Carthage, Christopher Marlowe penned the following lines, he was not breaking any new literary ground:

Tell him, I never vowed at Aulis’ gulf
The desolation of his native Troy,
Nor sent a thousand ships unto the walls…

3. A Thousand Ships to Tenedos.

Tenedos is a small island off the shore of north-west Anatolia. It was at Tenedos that the Greeks housed their fleet during the many years of war with the Trojans. In his second play, Tamburlaine, Part One, Christopher Marlowe linked Tenedos to his thousand ships of Dido:

Helen (whose beauty summoned Greece to arms,
And drew a thousand ships to Tenedos,)

Christopher Marlowe seems to have known the Tragedies of the Roman poet and philosopher Seneca very well. He may have borrowed more linguistic ideas from Seneca than he did anyone else, other than Arthur Golding. He had a particular fondness, it seems, for Seneca’s Eighth Tragedy, Agamemnon.

It is in the 1566 English translation of Agamemnon, by John Studley, that we find the following line:

And cut the course, which following on
a thousand ships did rive,
Then first a wind with pipling puffs
our launcing ships did drive.

Appearing in the fourth line, launcing is an alternate form of the word launching.

Is it from these lines that Marlowe got the idea to connect the idea of launching the Greek ships with the thousand ships he had used in Dido and Tamburlaine? The connection in Seneca is not tight enough to be able to say so for sure, but a search of the EEBO database reveals that it is only in Seneca’s play that the word launch (or any of its derivatives) appears with a thousand ships. The idea of adding a face to the image, however, seems to have originated with Marlowe. The culminating version of the line finally appears in Christopher Marlowe’s Doctor Faustus:

Was this the face that launched a thousand ships
And burnt the topless towers of Ilium?

So was this line, “Was this the face that launched a thousand ships”, instantly recognized as one that would become immortal, or even considered an unusually memorable line when it was published?

The answer is unequivocally, “no.” 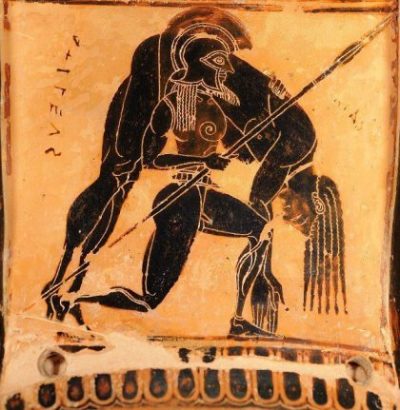 The first clue we have pointing to the absence of interest in this line comes from the 1594 publication of an anonymous play, The Taming of a Shrew (this is an alternate version of Shakespeare’s The Taming of the Shrew, which appears in its earliest form in the 1623 folio).

A Shrew is most noteworthy for its being saturated with language and imagery borrowed directly from Christopher Marlowe’s first four plays (Dido, Tamburlaine Parts One and Two, and Doctor Faustus).

The extent of the lifting of language from Marlowe’s plays is actually stunning in its extent. But the fact of the numerous borrowings is not what catches our eye for our present analysis: what is more fascinating is that the author of A Shrew chose to borrow the Tamburlaine version of the thousand ships line rather than the Faustus version:

More fair than was the Grecian Helena
For whose sweet sake so many princes died,
That came with thousand ships to Tenedos!

This suggests strongly that whoever wrote A Shrew – whether it was some unknown hack, a friend of Marlowe’s, or even Marlowe himself – did not think that the Faustus version of the line was anything special. In deciding which version of the thousand ships line to borrow (ie. the Dido, Tamburlaine or Faustus version), he decided to go with the Tamburlaine version. In other words, if the author of A Shrew had considered the Faustus version to be memorable, or even of just of greater worth than the Tamburlaine version, would he not have been more likely to borrow that version for A Shrew?

2. Shakespeare, Heywood and a Thousand Ships.

Christopher Marlowe’s plays were linguistically tremendously influential on the literature in the decades which succeeded them. Each of his plays spawned scores of phrases and collocations that were borrowed and used by dramatists, poets and prose writers for the next two generations.

Yet only two authors are known to have borrowed the Faustus thousand ships line: the first was William Shakespeare. In the 1608 quarto of Troilus and Cressida, we find the following line:

Is she worth keeping? why, she is a pearl,
Whose price hath launch’d above a thousand ships,
And turn’d crown’d kings to merchants.

Notice, though, that Shakespeare exchanges face for price, and adds the word above into the line after launched.

The second author to reuse the line was dramatist Thomas Heywood, in his play, The Iron Age, published in 1632:

this the beauty that launch’d a thousand ships from Aulis’ Gulf?

Here, too, the famous line was not borrowed in its entirety; face once again has been replaced, this time by beauty.

In the 18th century, only Shakespeare’s version of the line found its way into print, this whenever Troilus and Cressida was republished.

It is only in the 19th century that Marlowe’s great line reappears, when Marlowe’s own works were rediscovered and republished.

We may use an ngram search to try to determine when the line was first recognized specifically as a noteworthy piece of writing; the earliest I have found is from the introduction of an 1843 reprinting of Shakespeare’s plays, in which one Barry Cornwall calls the couplet “the well-known lines”, which “may be referred to as a fine instance of imagination.”

The ngram search further reveals that it was only after 1850 that the line began to be referred to more regularly in print, and references to it really blossomed in the early 20th century.