Title: The Massacre at Paris.

Christopher Marlowe’s The Massacre at Paris survives in an undated edition which was likely published sometime in the early 1590’s, after Marlowe’s death in 1593. Unfortunately, the printed play is a greatly abbreviated version of the original script, with perhaps a third or so of Marlowe’s handiwork lost forever, and what has come down to us is fairly well mangled. Perhaps unsurprisingly, the publishers managed to recreate or preserve all of the on-stage murders, so that much of the play consists of a series of short scenes in which a handful of Protestants run on-stage, slaughter a Protestant or two, and then quickly exit, off to the next killing. 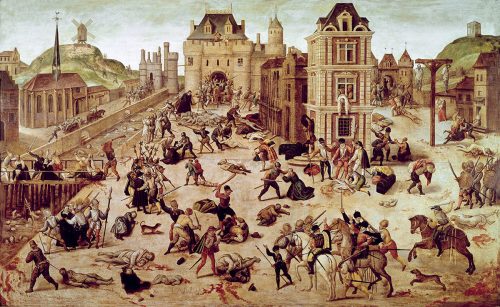 For those of you who are statistically inclined, The Massacre of Paris may well be the bloodiest of all the plays of the Elizabethan canon; a total of 18 individuals die on-stage – most from having been stabbed, and a couple from being poisoned; in comparison, the most blood-soaked of all of Shakespeare’s plays, Titus Andronicus, contains only 14 murders (but Titus does get extra points for Lavinia’s bloody stumps – her hands had been cut off – and her de-tongued mouth).

The Massacre of Paris takes place during France’s religious wars, a wearisome and demoralizing four decades that comprised most of the second-half of the 16th century. Not unexpectedly, the backstory is exceedingly complex, but the modern reader need not worry, as our notes and annotations will keep everything clear.

Our Story: The Protestant Reformation was only a few decades old, but the French Protestants, or Huguenots, had become so militarily and politically powerful that they seemed to threaten the very existence of the country’s ancient Catholic order. To the rescue comes Henry, the Duke of Guise, as virulent an anti-Protestant as one can find. Henry has no compunction about rubbing out all of France’s enemies – which includes every one of France’s Protestants!

Still-Familiar Words and Phrases that Research Suggests Appeared
in English Literature for the First Time in The Massacre at Paris: