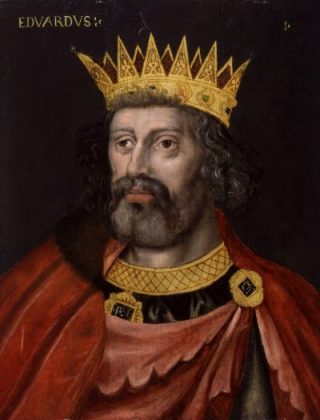 Here is a play that cries out to be revived at least once every quarter-century. Edward I is a rollicking, if uneven, roller-coaster of a play, containing all of the elements a modern audience could hope for in an Elizabethan play, from stage-warfare and supernatural occurrences to grand pageantry and broad slapstick comedy. And while no one will ever claim Edward I matches, or even comes close to, the quality of any history of Shakespeare’s, or even Marlowe’s Edward II, we have here a bit of stage-craft that should not remain as neglected as it is either.

An unusual feature of Edward I is the degree to which Peele has gone out of his way to assassinate the character of the medieval king’s wife, Eleanor of Castile; a victim of the late 16th century’s anti-Spanish mania, Eleanor was the subject of a vicious ballad that painted her out to be a monster of comic proportions – for example, she insists at one point that all the women of England, whom she holds in contempt, should have their right breasts cut off. Peele made sure to incorporate as many of the ballad’s grotesque incidents into Edward I as he could. Peele enjoyed his slander of Eleanor so much that he even included part of the story line of a different ballad that slandered a different Eleanor – Eleanor of Aquitaine!

We offer here the opportunity for you to review both of the ballads in question; the first, which attacks Edward I’s Eleanor of Castile, is entitled  A Warning-piece to England Against Pride and Wickedness; the second, which ruins the reputation of Henry II’s Eleanor of Aquitaine, bears the simpler title, Queen Eleanor’s Confession. We warmly recommend you read both so you too may enjoy these bits of scurrilous doggerel as much as did the Englishmen and women who read it – or heard it recited – in the late 16th century.

The king, we should note, remains throughout the play the model English-monarch, just, even-tempered and fair-minded.

Our Story: King Edward I has just returned from Crusade in the Holy Land to find that his father, Henry III, has died, leaving him the crown. Edward finds himself having to deal with the intractable problems of Welsh and Scottish rebellion, as well as having to mind his somewhat mad wife, the Spanish princess Elinor.

(We direct a special thank you to classicist Alison Parker for her translations of Peele’s original Latin expressions.)

Still-Familiar Words and Phrases that Research Suggests Appeared
in English Literature for the First Time in Edward I:

hotshot
hot dog (first appearance in English literature, referring to a person)
irregulars (first use as a noun)
to leave (first use as a verb, meaning to depart)
prize-corn
rumple (first use as a verb)
war-drum
“at your majesty’s command”
“fight it to the last” (precursor to “fight to the last” and “fight to the last man”)
to hold one by the collar
“(your) life is dearer to me than…”
“more than flesh can bear”
“out of cash”
to run a sword up to the hilts
“soft bedding”
collocation of stand and deliver (referring to the classic English highwayman’s command)
westward ho!