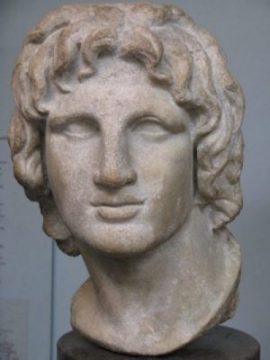 Campaspe may be the first play John Lyly wrote after the success of his two Euphues novels, and as a result, its language is heavy with the parallel sentences and phrases that are the primary feature of Lyly’s euphuistic writing style. On the other hand, the play features a number of long forgotten but fascinating ancient philosophers, including one Diogenes of Sinope, who is unimpressed by Alexander the Great, or anyone else for that matter, and is never caught without a sharp retort for anyone who presumes to talk to him. I have included in the annotations a number of entertaining anecdotes that have been passed on about these once-famous great thinkers.

Our Story: Alexander the Great has just conquered

Greece, and is settling in for a period of rest with his army in Athens. The King of the Macedonians falls in love with Campaspe, a Greek captive, but unwittingly has competition for her affections from the great portrait painter Apelles. Meanwhile, Aristotle, Plato and numerous other philosophers fawn over Alexander – all except Diogenes.

Still-Familiar Words, Phrases and Collocations that Appeared in English Literature
for the First Time in Campaspe:

grunt like a pig
first appearance of “your __ is on fire.”
“melt with desire“