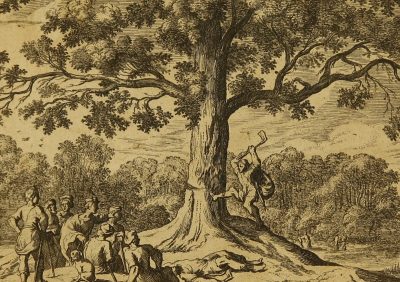 Why should I read Love’s Metamorphosis?

Love’s Metamorphosis, John Lyly’s shortest play, appears, on first reading, to be nothing more than a superficial bit of fluff, possessing less gravitas than Lyly is normally even credited with, but critics have praised it over the years for its tight symmetry and balance, as well as its creative and delightful stage effects. The primary theme of the play (typically for Lyly) is love, and how love should be respected, even revered. The actual date of composition of Love’s Metamorphosis is unknown, though it is believed that Lyly wrote it after Gallathea, since our play self-consciously contains references to this earlier work!

Our Story: three woodsmen are in love with three nymphs, but their affections are unreciprocated, because the nymphs are avowed virgins, dedicated to serving the goddess Ceres. The trouble begins when the supercilious farmer Erisichthon cuts down the deity’s sacred tree, leading Ceres to punish him severely. In the meantime, Cupid, the god of love, is unhappy that the nymphs resist love.