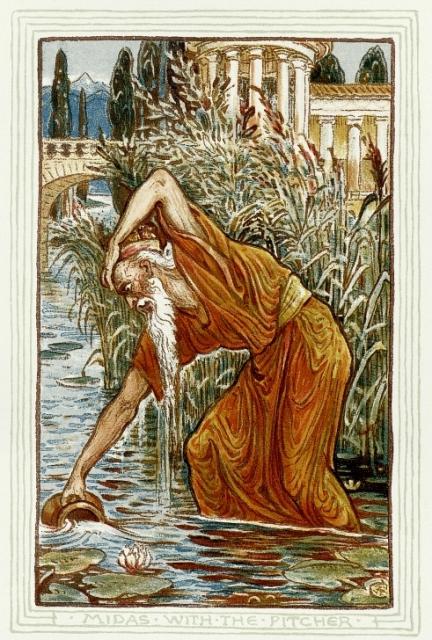 The famous story of King Midas was told by Ovid in his Metamorphoses, and, like all of the myths contained in his collection, was well known to educated Englishmen. Lyly’s retelling is faithful to the original, and focuses on the lessons to be learned by the king’s poor decisions: be careful what you ask for, and be careful to not offend your gods! Midas is also noteworthy for containing one of the longest single monologues in the entire Elizabethan canon, a speech of over 700 words.

Our Story: Bacchus, the god of wine and revelry, has been royally entertained by Midas, the king of Phrygia, and to thank the king, grants him any wish. Unfortunately, Midas, who has been given bad advice by his counselors, asks to receive the famous Midas-touch. Having eventually learned his lesson, Midas then makes the mistake of judging against the powerful Olympian god Apollo in a musical contest. The revengeful god punishes Midas, and the Midas’ new round of suffering is the focus of the second half of the play.