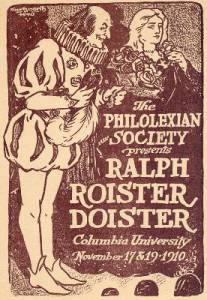 Ralph Roister Doister is important historically because it is the earliest “proper” English stage comedy, having been written somewhere in the early 1550’s. The premise of Roister is simple: how foolish can Mathew Merygreeke cause the vain but cowardly Ralph Roister Doister to appear? Despite the clunky and slightly archaic language, Nicholas Udall’s work is a rollicking and fast-moving farce that presents some very clever ideas and is still entertaining to read today. Highlights of Roister include the famous mispunctuated letter and the Battle of the Servant Armies.

Our Story: Ralph Roister Doister is in love with the widow Custance, and enlists the help of his perpetual flatterer Mathew Meygreeke; the only problem is that Merygreeke is more interested in helping the proud but hapless soldier and lover make a complete ass of himself.

Still-Familiar Words and Phrases that Appeared in English Literature for the First Time
in Ralph Roister Doister (according to the OED):

heart of gold
honey (as the first word in a term of endearment, such as “honey-pie‘)
nurse (as a form of address: “hello, nurse.”)
tomboy
wedding day