WHY READ JAMES THE FOURTH?

With James the Fourth, Robert Greene finally reached what would be the fullest maturation of his play-writing abilities (the degree to which his skills as a playwright might have further developed, if at all, can only be speculated at, as he died in 1592). We have a complete and lengthy play with a delightful mix of carefully crafted characters of every sort, from the villainous to the virtuous. If an audience loves to have someone to hate, then Greene’s contemporaries would have had an opportunity to savour the undiluted wickedness of an explicitly Machiavellian schemer Ateukin. 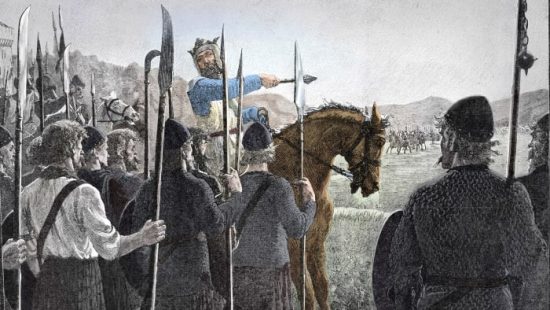 We should note here that James, despite its title, is not a history play in the slightest. It is a tale of melodramatic love (well, lust mostly) with a strong lesson about corruption in the upper strata of society (not English society, mind you, but Scottish!).

Greene made an unusual decision in writing James the Fourth: he chose to have his Scottish characters (especially early in the play) speak a weird hybrid of standard English and Scottish dialect. This is primarily the case with the work’s oddest character, the Scotsman Bohan, who was so disenchanted by the evils and hypocrisy of society that he has abandoned all human contact and lives alone in a tomb!

Our Story: James, King of the Scots, has just married the English princess Dorothea, but finds that he has fallen desperately in love − during his wedding no less − with the daughter of a countess. Despairing of possessing his true love, James is rescued by the ministrations of the stranger Ateukin, who claims to have all the power and wisdom to help him gain the woman of his dreams.

Download and Read The Scottish History of James the Fourth: