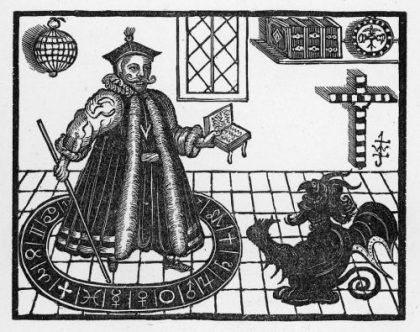 Here we present the most famo 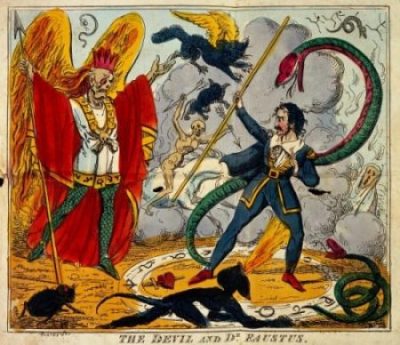 us drama from the Elizabethan era not written by William Shakespeare. Christopher Marlowe’s Doctor Faustus also contains the most famous line of the non-Shakespearean Elizabethan canon, “Was this the face that a thousand ships?” The story of the man who sold his soul to the devil has fascinated audiences ever since it was first performed in the late 16th century.

Doctor Faustus was published frequently in the early 17th century, the earliest edition appearing in 1604 (the ‘A’ text): this 1604 quarto is a rather short version of Marlowe’s play; a second, longer version was published in 1616 (the ‘B’ text). The question as to which of the two versions is the more authentic one, meaning which is more likely to have come from the pen of Christopher Marlowe, has puzzled scholars for more than two centuries. The question may never be fully settled.

Our Story: the famous theologian Doctor John Faustus is spiritually unfulfilled with his chosen vocation, teaching and debating at the university in Wittenberg. So, he makes a deal with the devil: if Lucifer will give him the power of sorcery and the ability to discover the secrets of the universe for a period of 24 years, Faustus will give the devil his soul.

1. A brief history of the phrase, The Face that Launched a Thousand Ships. An article written by Peter Lukacs.
2. The Famous History of Doctor Faustus (Anonymous, from the 1580’s). Read the original English language translation of the Faust legend. Marlowe based his script for Doctor Faustus on this publication.
3. Watch the feature-length silent movie adaptation of the story of Faustus, from 1926: click here.

Still-Familiar Words and Phrases that Research Suggests Appeared
in English Literature for the First Time in Doctor Faustus:

depth (as applied to describe thought)
proficient
short-cut (as applied to the easiest or shortest way to get something done)
zounds
“audacious deeds”
“damned book”
“damned slaves”
“frivolous demands”
“God in Heaven knows”
“was this the face that launched a thousand ships?”