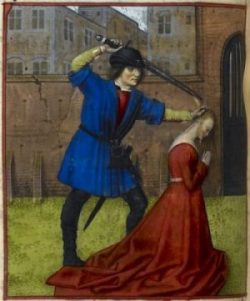 In its portrayal of the steadfast suffering and unremitting faith of the Roman Empire’s Christians, The Virgin Martyr contains some of the most beautiful verse of the Elizabethan era; at the same time, it contains two of the most vulgar characters ever presented on stage, Hircius and Spungius, the servants of the play’s heroine: one is a sex-addict, the other a drunk. No wonder it was such a popular play.

Our Story: The emperor Diocletian has instituted a general persecution of Christians throughout the Roman Empire. One maiden, Dorothea, refuses to be intimidated, and will not abandon her Christian beliefs. Unfortunately for all parties involved, the governor’s son is in love with her!

Still-Familiar Words and Phrases that Appeared in English Literature for the First Time
in The Virgin Martyr: