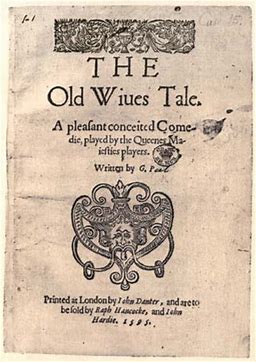 George Peele’s father, James Peele, was a clerk at Christ’s Hospital, and also the author of two works on bookkeeping. The family was said to have hailed from Devonshire.

Young Peele was a “free scholar” at the hospital from 1565-1570, after which he attended Oxford University, originally entering Broadgates Hall (a school of law) in March 1571, then as a member of Christ Church (another school at Oxford), graduating with his B.A. degree in 1577, then his M.A. in 1579. Peele is thought to have written a poem, The Tale of Troy, while at school, and also translated one of Euripides’ ancient Greek plays, either Iphigenia at Aulis or Iphigenia in Taurus.

Moving to London around 1580, Peele quickly descended into the dissipated lifestyle practiced by so many of the writers of the day. He lived in poverty, sickness and squalor much of the time, and when Peele did manage to make some money from his writing, he quickly squandered it on merry-making at “taverns and ordinaries”.3

George Peele was believed to have kept close and friendly company with the other bright literary lights of the day, such as playwrights Christopher Marlowe, Robert Greene, Thomas Nashe and Thomas Lodge. The habit of the members of the clique was to write in all modes of literature, and Peele was no exception, producing poems, pageants, and plays. He is believed to have acted as well, as a member of the Lord Admiral’s Company and the Queen’s Men. 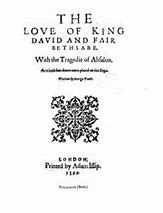 Peele was dead by the end of 1596. It is a testament to his destitution that editors writing biographical sketches about Peele even into the 20th century had no idea when exactly he died. Even The National Biography’s entry of Peele, written in the extreme late 19th century, stated simply, “The date of his death is unknown.” Most commentators wrote only that Peele died “sometime before 1598.” A 1598 tract noted that he died of a “loathsome disease”. A 1934 publication, Elizabethan and Stuart Plays, states he was buried 9 November 1596.4

A decade after Peele’s death, there appeared a booklet entitled Merry Conceited Jests of George Peele, a work which is generally suggested to have been only apocryphally written by Peele himself. The tract contained tales of “discreditable escapades”,1 stories which show Peele as a man of no scruples, earning money through fraudulent, if not entertaining, schemes.

While Jests is thought to be largely a work of fiction, it may contain some elements of truth: the work describes Peele as having a wife who brought him some property, which he quickly consumed, and a ten-year-old daughter; that he lived at Bankside; and that he possessed a voice “more woman than man.”

Early editors write of Peele’s genuine sense of humour, a gift for the truly merry, as opposed to farce and wit.2 He has been called “an artist of words”,2 a skillful manipulator of verse,1 and a writer capable of great “tenderness and poetic beauty.”3 While he was no Marlowe, Peele remains an important figure of the Elizabethan era.

The COMPLETE PLAYS of GEORGE PEELE 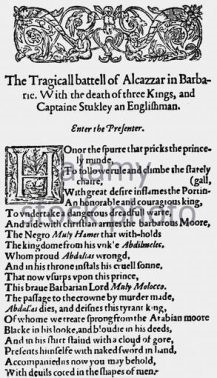 A number of plays likely written by Peele have failed to survive the ravages of time: of these, the following titles are known: (1) Iphigenia, (2) The Hunting of Cupid, and (3) The Turkish Mahomet and Hiren the Fair Greek.